Marchwood Power Ltd is a joint venture between Scottish & Southern Energy and MEAG. 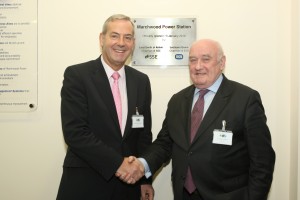 Scottish and Southern Energy owns and operates 127,000 km of overhead electricity lines and underground cables in central southern England and the north of Scotland, delivering electricity to 3.5m homes, offices and business. It is also the owner of Airtricity, one of Europe”s largest renewable energy businesses.

MEAG is a proprietary asset manager and 100% subsidiary of Munich Re with approximately 230 Billion Euros of assets under management. MEAG’s responsibilities include, amongst others, the management of infrastructure and renewable investments for Munich Re. Munich Re is one of the leading reinsurance and insurance companies in the world with over 45,000 employees and is listed on the Frankfurt Stock Exchange. Munich Re shares are constituents in numerous national and international stock indicies such as the DAX 30, DJ EURO STOXX 50, MSCI Euro, FTSE EUROTOP 100 and DJ Sustainability World. Further information can be found at www.meag.com and www.munichre.com.